Fighting to be da BEST IRC Network Ever!

GTAXLnet is an IRC network like no other. We care about our users and work hard to provide professional-grade services for free. GTAXLnet is also looking to provide other internet related services such as DNS hosting, CDN, DNSBL, and more for free. 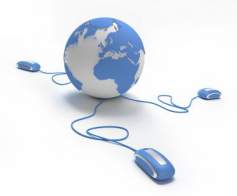 IRC is the acronym for Internet Relay Chat. Internet Relay Chat is an internet protocol created in 1988 by Jarkko Oikarinen used to relay messages. Internet Relay Chat provides a way of communicating in real time with people all over the world. There are various IRC networks (multiple servers linked together), or IRC servers (one server); GTAXLnet being one of them. IRC is designed for group chat communication via channels or forums. An IRC network or server can host up to thousands of channels. A “channel” is like your own chatroom where users can join and discuss a similar topic. IRC also allows private messaging for one-on-one communication. IRC is old-school but is still widely used today. Since IRC is mature and well known, it can easily be implemented into any program. When a user types a message, the IRC server relays it to all the other users in that channel. Several if not all open-source program projects provide an IRC chatroom for their users to interact and gain real-time support. IRC is a good way to communicate with a community or fan-base in real-time. You can find more information on IRC here. 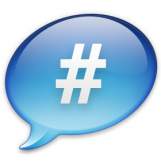 How we got started

With the financial support of his best friend Joey, Victor started up GTAXLnet on a SwiftLayer IRC shell in late 2009. Joey was Victor's best friend and being an asset was granted co-owner of GTAXLnet for a couple years. We started off with a .tk domain then moved to a co.cc; both free domain name services. Victor had little to no knowledge of how Linux worked and we didn't even have a BOPM. However, we provided IRC service the best we could at the time. Over the years Victor's knowledge of Linux, IRC, and related concepts grew rapidly. We switched to VPS's and even got a professional looking domain, gtaxl.net. Every year we learn more and more from experience and thus can provide a better service (in theory). 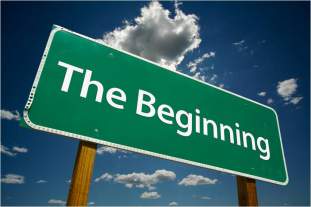 Victor and several of his other friends, including Joey used GeekShed IRC prior to GTAXLnet's existence. We used GeekShed mainly because Chris Pirillo hosts his community there. A complication arose on GeekShed where Victor's best friend ComputerCoderGuy got banned from the network as a result of his little brother fooling around on his laptop. Feeling sorry for ComputerCoderGuy, Victor let ComputerCoderGuy on his computer via TeamViewer so ComputerCoderGuy could tell his channel about the incident and to say goodbye. GeekShed caught Victor and set a permanent ban on him. Victor filled out a ban appeal and got quick response of NO, you're not allowed back on GeekShed ever. Joey asked in #help what happened and the staff relied that no third parties are allowed. Victor had given Joey permission to speak upon his behalf. Instead of GeekShed coming up with a solution they straight out permanently banned Joey as well. This led us three to be outraged. We all had sent proper appeal forms to GeekShed, they failed to listen and said they will not lift the ban. This led to a rage video done by Joey and uploaded on Victor's YouTube channel. The video gained over 1k hits overnight and resulted in GeekShed and their community to become even more angry at us. Comments were left by GeekShed users claiming for Joey to see Dr. Phil, claiming he was a caveman, and other related comments. The GeekShed staff even discussed the video on IRC and talked bad about Joey's mom, claiming they were cave people. We searched for other IRC networks to use instead, we did settle in a couple but later left because of inappropriate staff behavior. Victor and Joey decided to run their own network called GTAXLnet. How hard could it be? We wanted to be the ones in charge and wanted to be a different network, a network that actually cares and won't treat you like a caveman. Thus GTAXLnet is born, and still here operating.

What we've been through

GTAXLnet is no noob when it comes to experience. GTAXLnet has a long history. We've taken many punches throughout the years. We've been through extreme amounts of DDoS attacks, some being several gigabits per second in size. We've had a DDoS attack for 6 months straight one time. Victor has dealt with various attacks and harassment ever since GTAXLnet started. It's gotten so bad that on two occasions police were called. One occasion being at Joey's house, the other at Victor's. Victor has been the target by some of the most powerful people on the internet. He's even had some problems from the Anonymous organization AnonOps. The people he deals with are lowlifes and make people's life miserable just for the lulz (entertainment). Victor lost his best friend Joey's friendship due to all the series of attacks that had been going on. Both Victor and Joey were the victim of a lot of abuse on the internet. Being through all this though has provided a huge learning experience for both Victor and Joey. This experience has helped GTAXLnet become more secure and a safer place to be. If we had not been through the cruel punishment of the world, we would probably still be vulnerable as we once was. Not saying everything is fixed, we still face day to day challenges and some things are just out of our control. Even though we've been through such awful things, GTAXLnet gets back up on its two feet and provides services. We've taken nearly every punch to the gut, nothing is new to Victor. GTAXLnet likes the saying never give up, and we will stick to it! Here are just SOME of the things GTAXLnet and the owner Victor have dealt with: 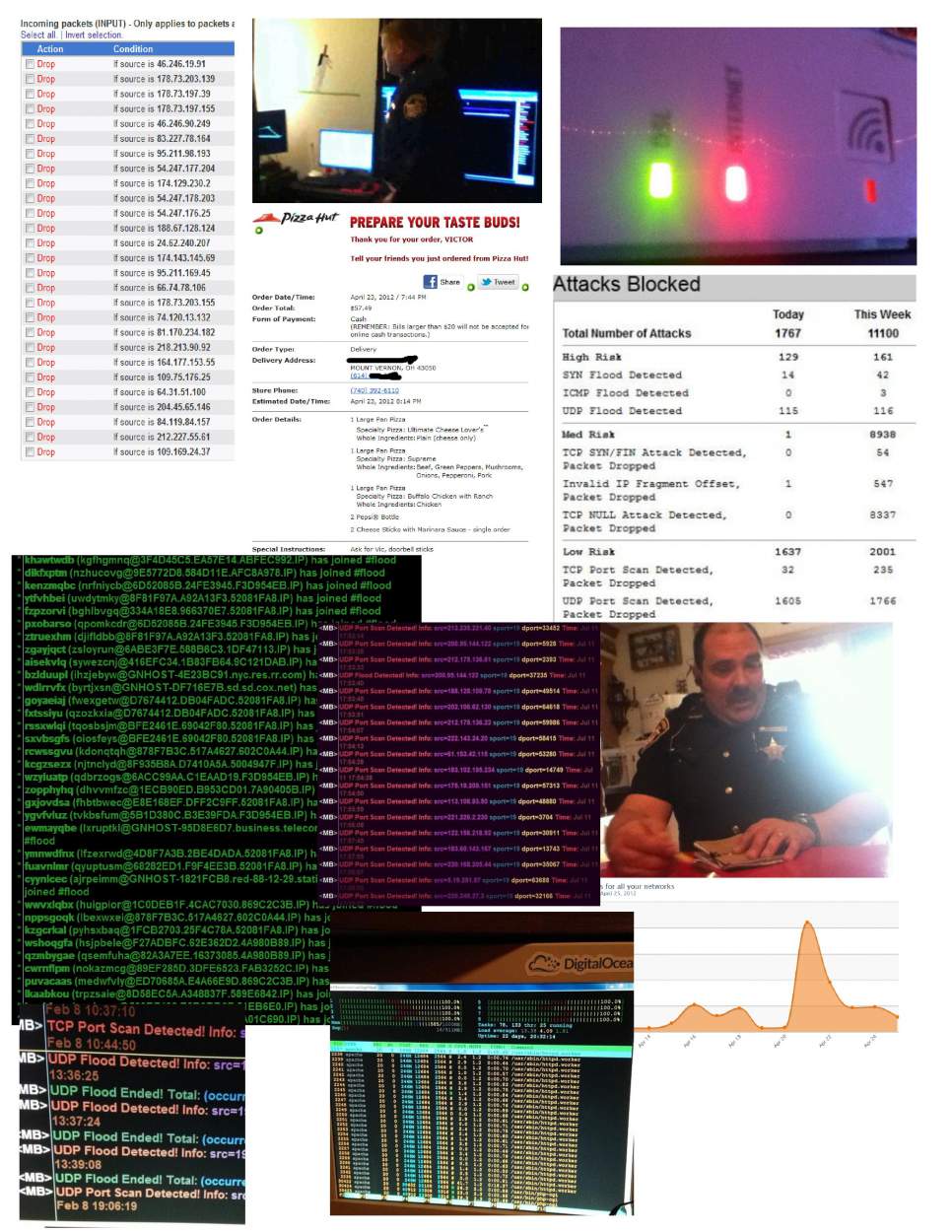 Why we are better than other IRC networks

GTAXLnet is not your normal IRC network. Our staff treat all our users like an actual human. We modify code to raise limits. We're an IRC network that never likes to give up, we always strive to get back up. GTAXLnet is far from a kid-ran network; you see a lot of IRC networks that come up and only last a year or two at most. Unlike some networks, we offer full services and are always open to new ideas. Some networks use cheap IRC shells, GTAXLnet always uses the best resources available and uses servers that are ran and under our control. Most networks use server donations, we don't allow server donations, we only accept monetary donations. Victor spends hours configuring GTAXLnet to the full potential and unlike other network owners, he reads the documentation to learn in-depth what every configuration does. Victor cares about the security of the entire GTAXLnet infrastructure and puts lots of effort in securing every avenue of each server. GTAXLnet's IRC service will always be free, however we depend greatly on donations. 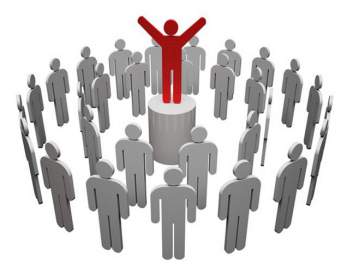 Why is it called GTAXLnet

No, it has nothing to do with Grand Theft Auto, perhaps I even think they took my name! GTAXL is the popular handle out of few the owner Victor Coss uses on the internet. Pronounced as you sound it out G-T-A-X-L, stands for Game Table Advanced XL. GTAXL derived from former name GTA which stood for Game Table Advanced. GTA was the name of the club I created in 2007 which involved a game table in our studio. GTA was referred as a mini casino in my room/studio (the basement) and was used as the company name on the board games I created. We then added the XL (which we don't call extra large, rather added letters to make the name more unique) when we started our first website (gtaxl.webs.com) which then resulted in the webshow GTAXL Live being created. GTAXL Live was a webshow that streamed 24/7 and at certain times me, my brothers, friends would play the game table. Several games were played such as pool, air hockey, mini bowling, and even board games I created (which were pretty epic, and lasted hours). If you're interested in seeing some of the board games I created, we have recovered some and they are archived. You can view them here. After GTAXL Live, I gain an interest in computers. GTAXL Tech came about and I started making tech based videos, such as how to take apart a computer, etc. Then I found Chris Pirillo on YouTube and later joined GeekShed IRC as the nick GTAXL. You then know how GTAXLnet came about as mentioned above. As for the studio and webshow they are all long gone, including the game table. I decided to keep the handle because it became a part of me. I named the IRC network after my name because I feel doing so will make me feel as if it's my work being presented and thus I'll do better quality in my work and have great pride in it. 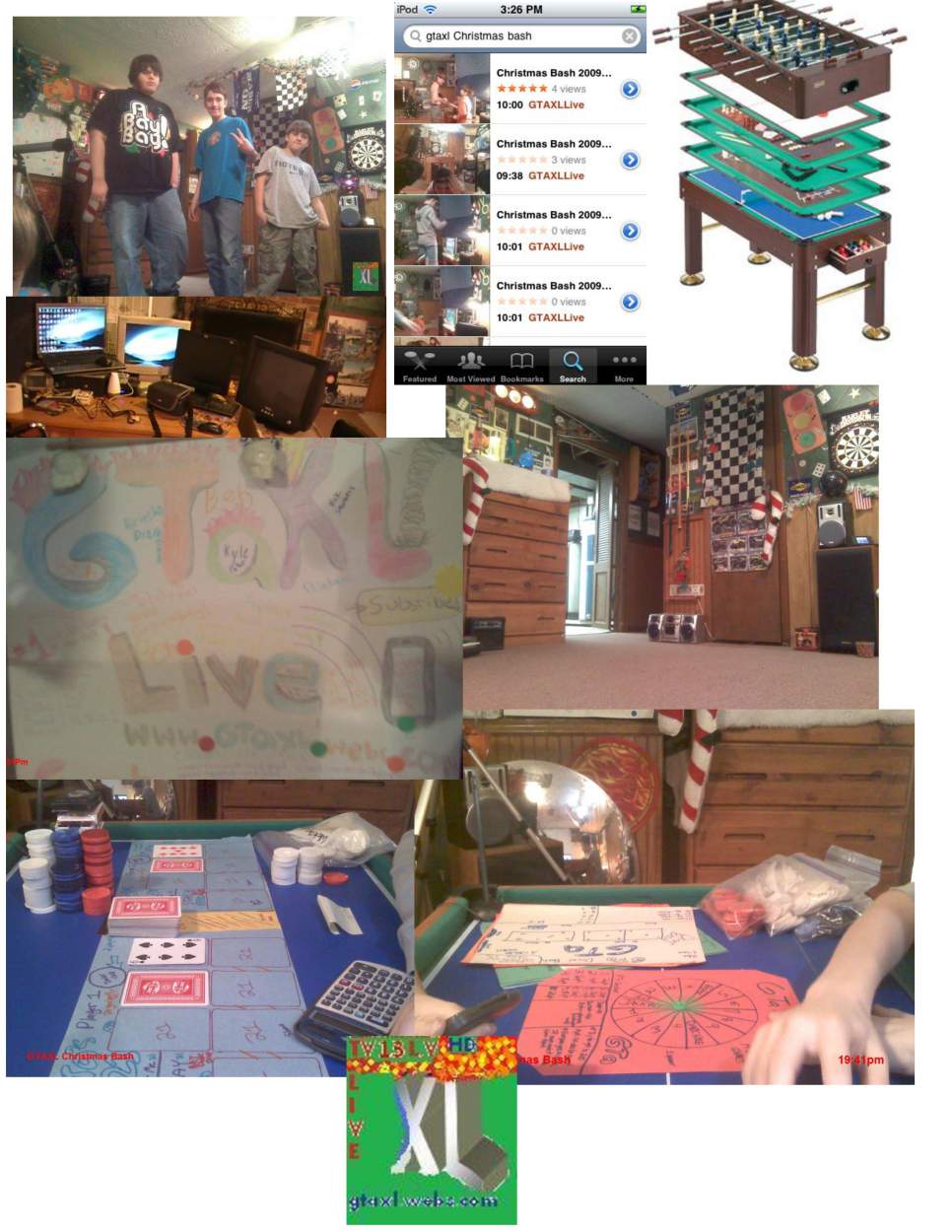